Politics is lot like a game of chess. In a game of chess, several calculated moves are made by players on both sides. But when a player realizes that he is on the verge of losing, he makes some rash moves to save himself from defeat. 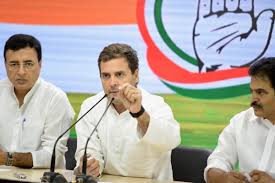 Rahul Gandhi recently announced a minimum income guarantee scheme. As per the scheme - NYAY, he has promised a minimum of 12,000 per month to 5 crore poor families across the country. But he had to mess up the calculations by saying that he will be giving 72,000 per year. Many were scratching their heads, trying to understand how 12,000 per month adds up to 72,000 per year. Rahul Gandhi also mentioned that this is a top up plan ie every family earning 6,000 per month will be given 6,000 extra. But the very next day Congress member Randeep Surjewala said that it is not a top plan & that every family will be paid 72,000 per year! The voters of India, who anyway have a tough time believing in the poll promises of the Congress party were now wondering whether to believe in Rahul Gandhi's words or that of his party member.

Why Rahul Was Forced To Make The Move

PM Modi & Amit Shah have been outsmarting the opposition in the run up to the elections. The Ayushman Bharat scheme announced towards the end of the year, the universal basic income, announced a few months back, tax slabs increase to 5L did go a long way to curb sentiments of anti incumbency. The balakot air strikes were the final nail in the proverbial coffin.

The writing was on the wall. All opinion polls, even the ones which were partial towards the Congress too are predicting 300+ seats for the ruling NDA. One must not forget that PM Modi is yet to get into full campaign mode. He is scheduled to attend 250 rallies in the run up to the polls. The silver tongued PM Modi, with famed oratorial skills & charisma alone will add 30 odd seats to the final tally through relentless campaigning in the final phases. It didn't help that the BJP has managed to stitch powerful alliances across most of the states, barring AP & Kerala.

The senior party members of Congress must have exhorted Rahul Gandhi to take drastic measures or face a embarrassing defeat at the polls. They probably must have brainstormed & hit upon a ploy to fool the gullible voters of India again. Like his predecessors, Rahul too is relying on lofty poll promises to swing the election. But will he succeed?

Even PM Modi's detractors are forced to admit, that he enjoys unparalleled support among the masses. Even while covering the recently held state elections in MP, Rajasthan & Chattisgarh, reporters claimed that while there was strong anti incumbency against the CM's, PM Modi continued to enjoy the support of the people. The voters even coined the phrase "Modi tujh se bair nahi, Raje teri khair nahi"(We don't have an issue with Modi, but Raje won't be spared).

The sole reason behind PM Modi's popularity, despite several attempts to tarnish his image is because of his sheer determination & hard work. PM Modi is known to be a man of his words. Unlike other politicians who only provided lip service to eradicate corruption, black money, unemployment & poverty & Pakistan PM Modi actually took measures to fulfill his promises. PM Modi acted upon his poll promises despite being aware that his measures could back fire. That explains why PM Modi's supporters get agitated every time someone criticizes his shortcomings.

The Gandhis on the other hand, are looked at with disdain. Garibi Hatao(remove poverty) was a term coined by Indira Gandhi during the '71 elections. Indira Gandhi & several other politicians have time & again used welfare schemes to retain power. It is shameful how her grandson still has to rely on this slogan during elections & blames PM Modi for poverty in our country. It is the biggest proof the failure of the socialist & welfare policies of the Congress government. While Rahul Gandhi's promise of farm loan waivers helped him win the three state elections, people are aware that the execution of the loan waivers was found to be lacking. There have been several news items which mentioned the gross corruption in the farm loan waivers schemes in Karnataka as well. While PM Modi directly deposits money into the bank accounts of the people, everyone is aware that there will be massive corruption in the disbursal of the NYAY scheme. Like Rajiv Gandhi once mentioned that only 15 paise out of every rupee commissioned by the central government reaches the public under Congress rule. The rest of money is gobbled by middle men - a community PM Modi has gone all out against.

While one has to wait for the results on May 23rd to check whether this move worked, one does hope that the Indian voter doesn't fall for such a frivolous scheme.