Rahul Gandhi is announcing freebies left, right and centre. If you are a poor farmer, he is promising  you INR 72,000 per month as per NYAY scheme. If you are an entrepreneur, he is promising to waive of all permissions required to start your company & even waive off angel tax for a period of three years. He seems oblivious to the fact that PM Modi has already announced a tax holiday to startups, apart from self certification under labor laws, patent & trademark rebates. His undermining the intelligence quotient of entrepreneurs is in poor taste. 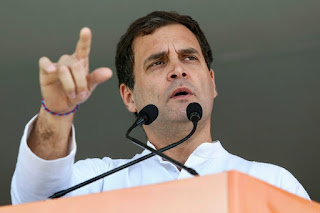 But the real question is, will it truly benefit the people in the long run? Will the voters respond positively to the freebies announced the Congress president just ahead of the polls?

There are three types of political leaders in the country. The first & the most common type of leader is the freebie distributing one - these leaders have no vision & lack any sort of passion to develop the country. They are mostly in politics for their personal greed. Uplifting their people is never high on their agenda. They barely do things for the long term welfare of their people & rely on freebies to retain power. Sadly, such politicians are still present in India. But on the bright side, the voters have wisened up to their ways & are voting them out of power. Indira Gandhi, Rajiv Gandhi, Lalu Yadav, Mulayam Singh Yadav & lately Rahul Gandhi are the best examples of such kind of leaders.

The second type of leader is the do-gooder. Such leaders are non-corruptible & are in politics for the sole purpose of serving their people. The lure of power & money pales in comparison to the happiness which they derive from seeing their country's grow. They take steps which will benefit the country in the long term & strive for progress, development of the country. Ex-PM AB Vajpayee is probably the best example of this type of leadership.  But sadly such leaders are often voted out due to anti-incumbency issues. One must not forget that India is still primarily an agrarian country & no one has been able to come up with solutions to solve the problems that agriculture in India faces. Such leaders do not believe in giving subsidies or freebies beyond a point & this doesn't sit well with the electorate, especially if the economy isn't going great guns. The voters realize their folly only years after the politician has retired & the freebie giving politician has ruined their lives.

The third type of leader is the shrewdest of the lot. They are visionaries & have a long term plan in place to develop the country.They do have the passion in them to work towards the progress & development  of their country, but are aware that simply takings steps to develop the country won't keep them in power & in fact will lead to the freebie giving politician getting elected back to power. They know the answer for overall development of the country & to stay in power is to introduce reforms along with giving freebies to keep anti-incumbency at bay. PM Modi & Telangana CM K. Chandrashekhar Rao fall into this category. These politicians stay in power for a long period  of time & usher in great level of development. It is difficult to unseat them, owing to their political acumen. Reforms combined with freebies, subsidies is a potent weapon.

While the formula of giving freebies in copious amounts was a trick which used to work earlier, thankfully the Indian voter is more aware. While the promise of freebies will cost the ruling NDA  a few seats, it will not make a huge dent in the final tally. The voters are smart enough to opt for long term development over short term benefits. But sadly the dream of earning money without working for it, has its share of takers & PM Modi must take steps to nip this threat in the bud.

Rahul Gandhi's freebies showering attitude shows his complete lack of vision & desperation to regain power at any cost. India will end up paying a huge price & joins the ranks of countries like Greece, who face huge unrest every time their governments speak about rolling back the freebies. The huge fiscal deficit will lead to a ratings downgrade, which will result in investors pulling out money & loss of jobs. This will have a cascading effect on the economy. After being considered a bright spot under PM Modi, India may go back to being a unreliable economy with limited growth potential.